Participants included: Richard Long, Hamish Fulton, Alan Barker, George Pasmore, Jeffrey Shaw, Bruce McLean, Wendy Taylor, Andrew Brighton, Perter Hide, David Evison and numerous others - 25 in all. Martin had already and uniquely developed time-based ideas and sculptures at Goldsmiths’ College of Art 1961-1966 with both college and public success. This development of timed-based works led him to investigate perceptual psychology and concepts involved with theories about cognative states of understanding. Coupled to this was his research into the training astronauts had to undertake in the USA with particular emphasis on sensory deprivation and its effects on body/mind space trainees.

This led to the film and events titled above. The film is a documentation of the activities of 25 artists placed under specific conditions and the effects displayed over a forty minute period.

The conditions outlined to the participants were to meet in an ante-chamber constructed outside Martin’s basement studio at St. Martin’s bringing with them swimming costumes. They were given no information about the event and were hooded once dis-robed. Blindfold they were led into the environment. 24' long, 15' wide, 14' high that had been divided into various sections containing tactile materials and forms, hung, spread etc including a female model posing absolutely still. The floor surface was raised at various levels to cause disorientation. Participants were asked to explore the space without talking and that no further participants would be watching. Various spatial sounds were played including whale calling tracks, trains in trouble, noises of the steam variety, space babble. These were increased and decreased in volume and periods of silence were introduced. Two hidden 16 mm cameras recorded simultaneously the event from each end of the environment.

The event was stopped after 40 minutes and numerous incidents happened - e.g. inability to move, crying, fighting, obsessive activities etc and the participants were led out still wearing their blackout hoods and without conversation. They were informed that a full discussion about the event would take place one week later.

At this meeting they were invited to see the environment for the first time on a split screen forming a visual 360-degree near cubist statement. The film served as a comparison to their own imagination of the nature of the environment and formed a strong discussional point that brought out many personal statements of comparison. Responses were heightened by the sensory deprivation experienced during the event.

This event takes ideas about the act of process and makes it an integral part of the performance. Ideas about process and resolution will be made apparent during its production. The event in three parts, allows audience participation in this process during the ‘interval’, which although is the ‘interval’, between ‘Part One’, and ‘Part Two’, is referred to as ‘Entract’, and is a creative workshop bridging the two parts.

The three sections are as follows:

Part One: Revelation and Awakening

The overall time for the event is 20 minutes, with each section approx. 6-7 minutes. There will be oboe accompaniment and staccato sounds rising to high crescendos during the event.

Sensory deprivation plays its part in this production as the performers are blind- folded for ‘Part One’ , and are led into the space without having seen it prior to the performance. The four personalities of the dance/performers and their individual experiences brings to the occasion four different responses and reactions to the situation. Each will have a sound character, eg. one repeats the word ‘buzz’; another has a whistle etc. Sounds will give a positional location for each dancer . Touch, movement, sound characterises ‘Part One’, but more importantly ‘mistakes’will occur as the dancers explore the space, its size, bracing, stretching, finding, bumping into, touching inadvertently and so on. The ‘mistakes’ are of quintessential importance and will be used to build on for ‘Part Two’ Accidents, tripping, breaking direction, wrong footed, squashing, dodging, wrong answers, directions, misunderstanding, underestimating, fallibility, breaking, touching wrongly, missed place, timing, missing, too fast, too slow, depending on the context. ‘ Everything from beginning to end you can remember, can think of, is correct and true, in the past, now and in the future.‘ ‘Everything you cannot remember but did think of, and will think of, is, and will be true and correct, for the past, now, and in the future’ These lines are said in unison by the dance performers as they are led into the space at the beginning of ‘Part One’. Exploration of the space and other dancers‘ movements in the space ceases after approx 7 minutes.

Discussion in the space with the 4 dancers and myself , with the audience around. The uncomfortable zone of ‘Part One’ creates forced errors that can be employed in ‘Part Two’. Discussion centers on each dancers perceived notions of their actions whilst blindfolded and now being able to see the space for the first time. Interaction between their memory recalls of movements and ‘mishaps’ and my observations, are also coloured by spectator suggestions of particular interest to them about movements and ‘mistakes’ they enjoyed/observed during ‘Part One’. This section may also be informed with camcorder images giving the dancers sightings of their movements and acting as an aide memoire. Pooling these experiences forms the choreography for ‘Part Two’ Taking and using the ‘mistakes’, ‘error’s,’ incorrect movements’ created in ‘Part One’, for the core of ‘Part Two’, uses them as ‘correct’, ‘true’, constructive imputs in the latter composition. They become positive inclusions and ‘right characteristics’. The dancers exercise and try out these combinations of movements as source stimulants accomodating them with shifts in rhythm, emphasis, timing, shaping, tempo, character, locational positioning in the overall structure, chance and focus.

The climax to the event is a continuous recreation of movement, characterised with configurations exacted and recognised from ‘Part One’, and now placed into a contextural whole, with all four dancers interacting in time and space, interlinked into a series of connected vignettes. The dancers are ‘unblinded’! 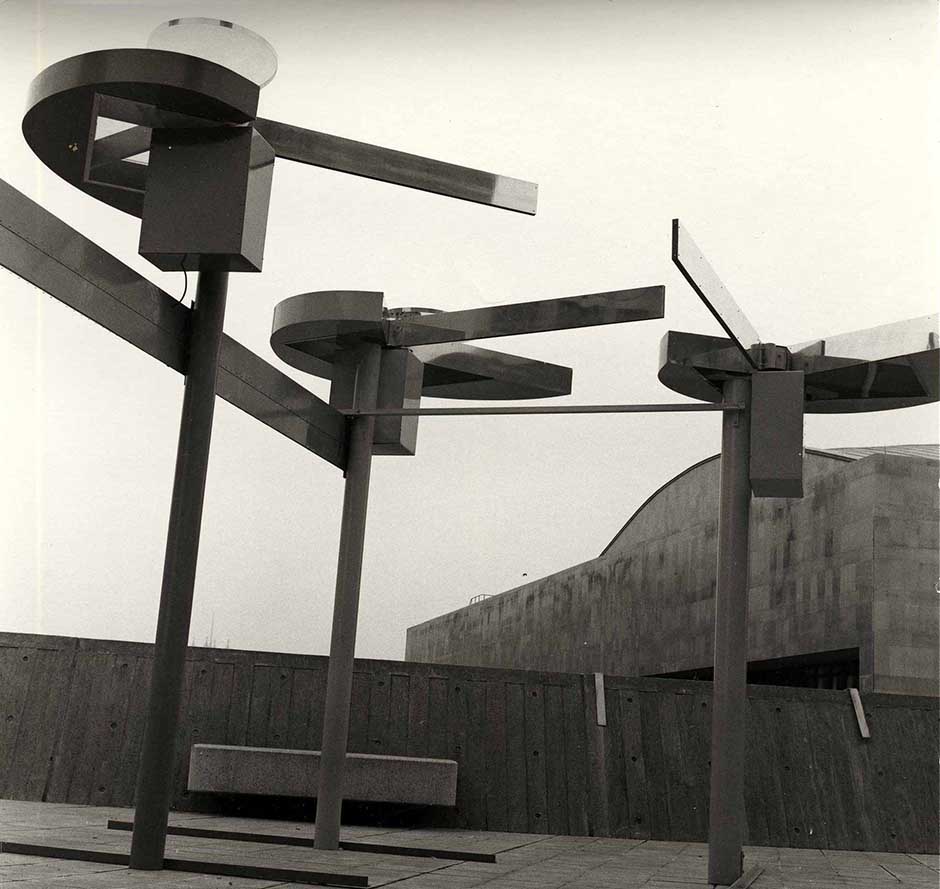 Five different types of movement and different speeds allowed sections to interlock. A programmer and stepping motor controlled movement variations. Light was reflected from the sculpture to form units of light that penetrated the immediate environment. This both structured and destructured the composition and immediate environment to the sculpture core. 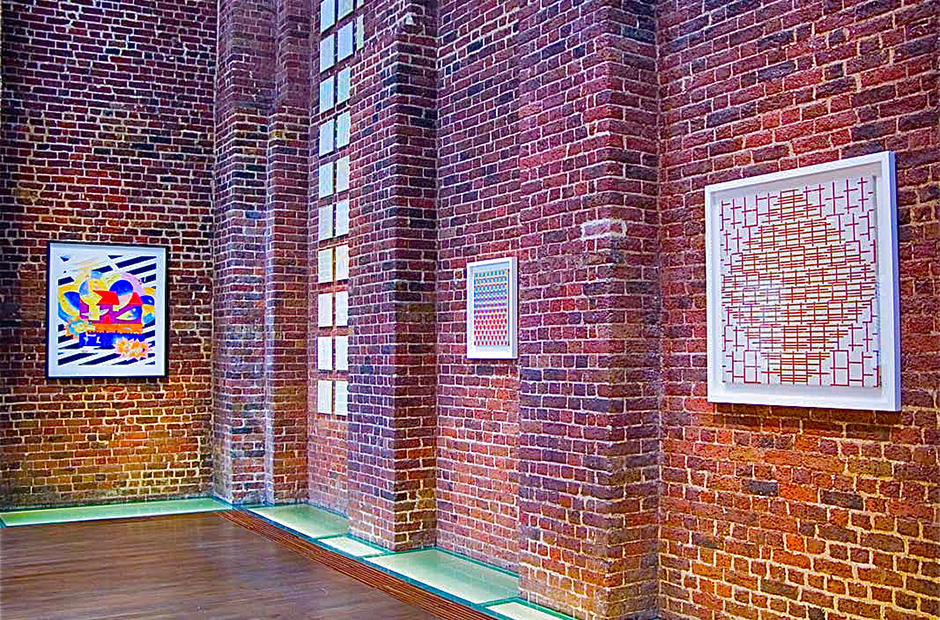 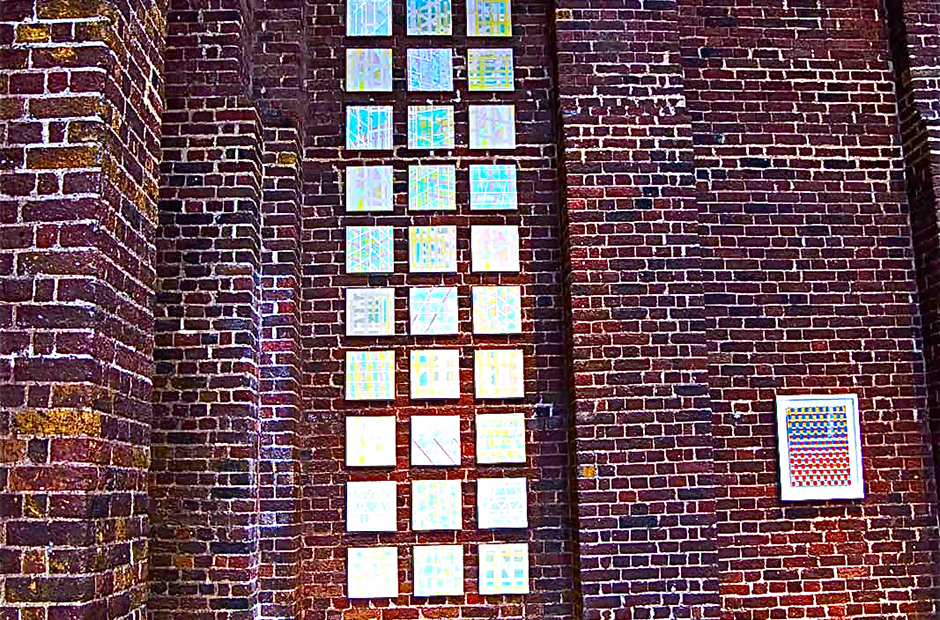 This was a one-person show in the building that was formerly the back-drop painting and set building studios for the Royal Ballet, Covent Garden. The various floors had been taken out to give the height for the props to be made. This gave the gallery an enormous head room going up to the top of the building, and made the exhibition area on the ground mezzanine level a very special place. I was able to install my 20' high painted installation from 1968-1971 there, the first time I had seen it properly installed since it had been made. The gallery bought the large water colour, 5' h. x 4' w. based on Chiswick House, St. Mark's, Venice, and black holes and presented it to the Victoria & Albert Museum, and which is now in their collection. 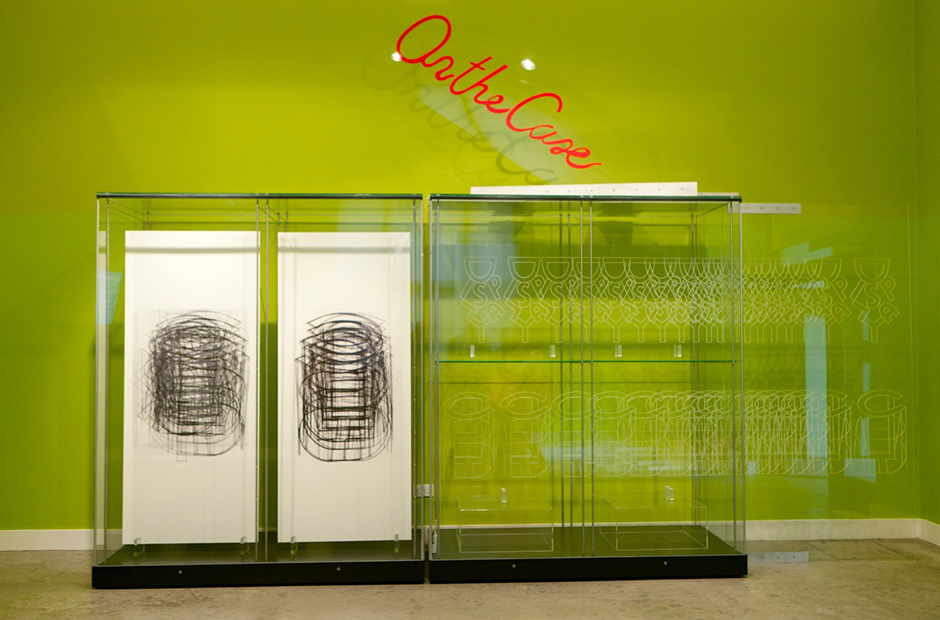 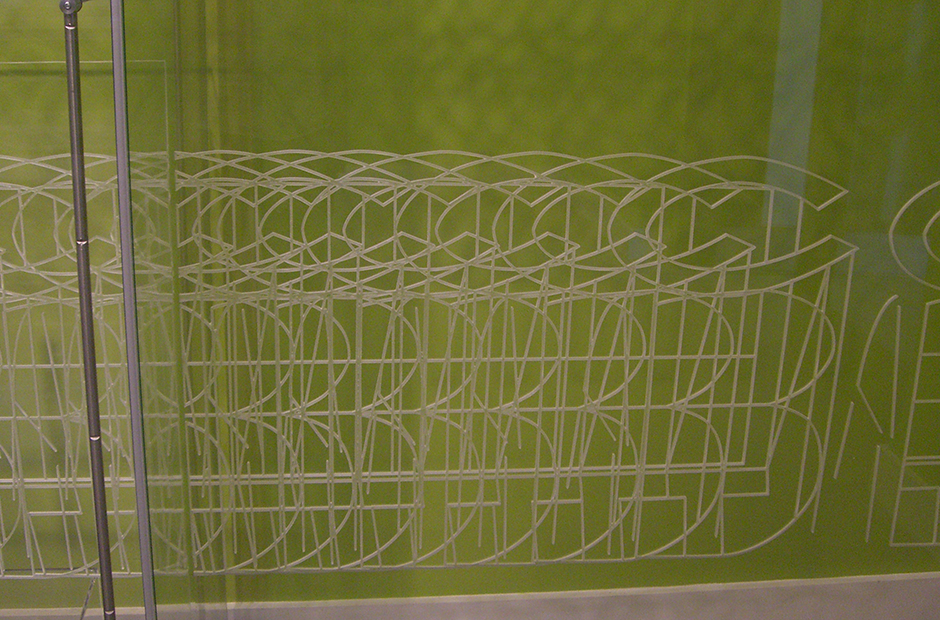 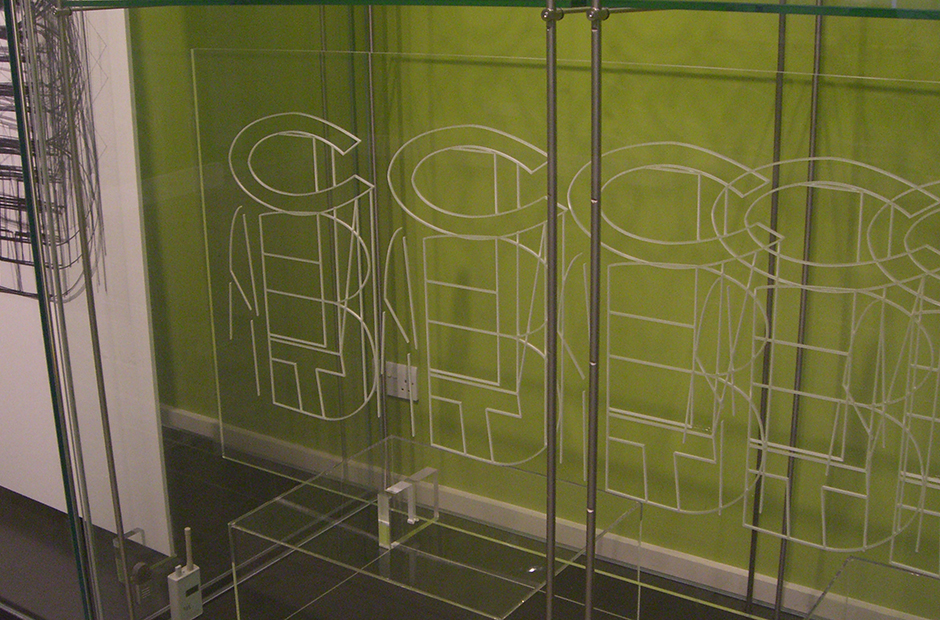 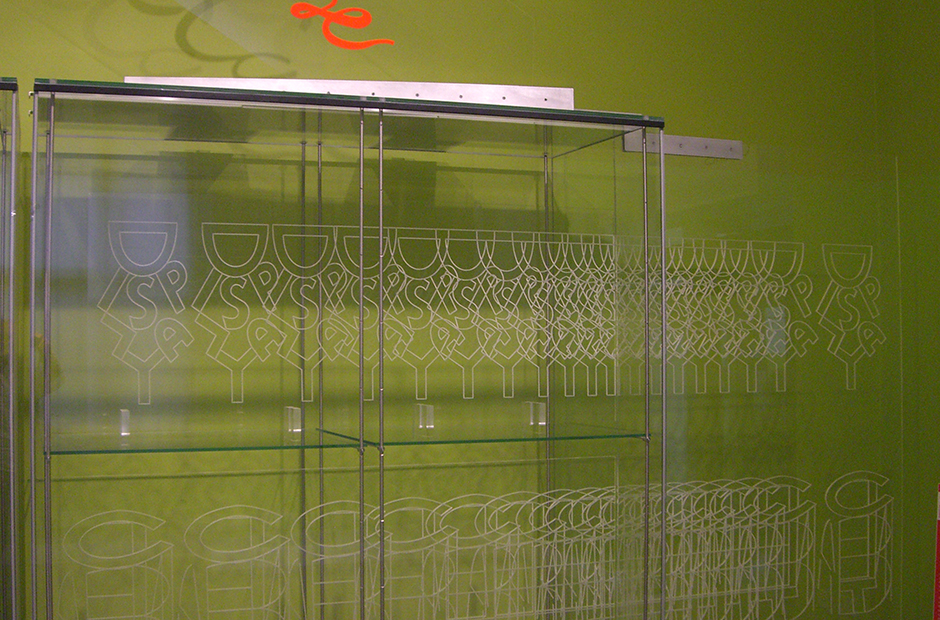 The conventional display cabinet used in gallery and museum exhibitions has hardly changed in form, function and shape since its inception several hundred years ago! It stands in a twilight zone of opposites.

It is seen but not seen. It is looked at but not looked at. It exists but does not exist. It is more cursed than celebrated and certainly mostly ignored!

My installation seeks to challenge these stereotyped perceptions, and question the concepts that formulate the ways of seeing imposed on the viewer. These have mostly remained unchallenged until now.

It is also a celebration of the case in point, the CABINET that cries out ‘I CAN’T BE!’

I was surprised, as my conscious evaluation rose to critical levels, how I had failed to recognise the unchanging conventions relating to the design , look and function of glass cabinet display cases! I asked myself how I came to accept this situation without question? Was I, as an artist ‘blind’ to this artefact, accepting it without question? Why did everyone else also ‘blindly’ accept this?

Stimulated by this proposition I have found a host of rich images and avenues of translation. I have tried to energise and open up the rectangular space giving it a dynamic and energetic character, with the restrictions that the actual case could not be physically cut into or fractured! That work will have to wait to the future!

The right hand box has several horizontal acrylic planes that push out through the right side of the display case by several feet. They appear to break through the side panel and carry images formed from the words ‘DISPLAY’ and ‘CABINET’. These two objects formed from their letters are cut into the acrylic sheets and speed up, overlapping each other as they push towards the containing glass plate of the case. They appear to break through and continue into the outer space and their freedom from the constraints of the ‘BOX’.‘THINKING OUTSIDE THE BOX’, – I am not offering ‘NEW BOXES’, in this work, however liberating, but hope to provide sufficient stimulation and excitement to provoke fellow colleagues into boxing new points of the compass in their thinking about function and meaning and look and design!

‘…and of the box’, which also has symbolic associations and repercussions within and about all of our individual lives and harnesses’.